“I need to serve my nation before I lose it,” he says.

For Dunlap, service is nothing new. In fact, it’s been a staple of his life. Dunlap was born in West Germany to a U.S. Army First Sergeant in Communications. Dunlap had enlisted in the army before he could legally buy cigarettes and had top-secret military clearances, working with the National Security Agency (NSA) on a joint mission in Bosnia circa 1998, before he could legally buy alcohol, he says.

In the nearly 10 years that followed, Dunlap was an interrogator for the Joint Special Operations Command (JSOC), the U.S. military’s top-secret intelligence force. He climbed the ladder of leadership to Sergeant First Class rather quickly — most don’t attain the rank without at least 15 years of experience — learned Russian, Serbian, Croatian, Urdu, and German, earned four college degrees, taught thousands of students, and earned numerous awards and medals, including the official recognition of the U.S. Congress. All in a decade.

He medically retired at the age of 28 with four screws and two pins in his spine. Still, he’s yet to retire his sense of humor. Today he is 41 years old and moves with a self-proclaimed “awesome limp” and a cane. It might not be as fast as everyone else, but hey, “FDR did it from a wheelchair,” Dunlap says, “I can live through it for four years.” 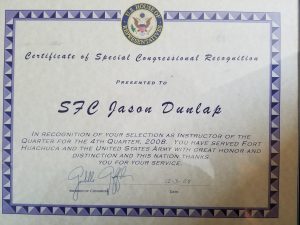 A self-described progressive, some of his policy proposals are common calling cards of the Democratic party; medicare-for-all, higher taxes on the top 5%, expanding access to an affordable are three. But inevitably, a conversation about his policy-passions drifts back to the central theme of his candidacy: cybersecurity and election security overall.

“People like us aren’t supposed to run for office,” he says.

Those who make a career of classified military operations in foreign nations often retire into silence for their own safety from external interests. “Honestly, I’m risking more than any other candidate,” he says. “I am literally risking the lives of me and my family.”

However, that career placed him front and center to what long-time friend and brother-in-arms, Jon Arnold, describes as “the Soviet long game” and strategy to sow discontent among Americans. “He understands it on many different levels,” Arnold says, “which, to be frank, is lacking in our current conversations on U.S. foreign policy, cyber security, election monitoring strategy, and a lot of the fake news/false news narratives that are out there.” 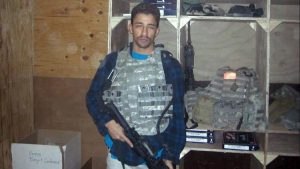 Dunlap implied accusations of misconduct by Rudy Giuliani in the Ukraine in a tweet from August 2018, nearly a year before his impeachment-related involvement in the same country, and had expected a Russian disinformation on internal American activity before President Trump’s inauguration. 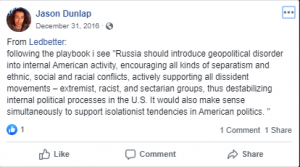 Arnold, at the very least, suggests that Dunlap’s candidacy can contribute to a conversation on U.S. foreign policy. “I think there’s a problem he sees with our foreign policy and the leadership in this country, and I think from his perspective he sees it as an opportunity that he can change,” Arnold says. “He’s uniquely qualified to do that, I think he probably feels that it’s his duty as someone from his background to at least try.”

“This is me ringing the alarm bells,” Dunlap says.

Dunlap’s wife, Tara Lemieux, an enlisted non-commissioned officer, past Chinese linguist for the NSA and member of his campaign staff, echoes similar sentiments: “the overall goal is that the smaller candidates running lead people in the United States to ask those harder questions, challenging those bigger candidates.”

Still, Dunlap does not consider his campaign a political statement. Instead, he clarifies, “I’m saying that I am a Russian speaking member of the intelligence community that’s served since 1997 and is really good at predictive analysis… this is me ringing the alarm bells.” Political statement or not, he is sending a message to the U.S.: we need to address foreign interference in our elections. Whether or not that message will be received remains to be seen.