Mosie Boyd is running for President of the United States.

If you search for her on Twitter, you’ll find some similar trends: “Who is Mosie Boyd? Why is she on the ballot?”

A tweet that stood out was a photo of over a dozen campaign posters; Bernie Sanders, Elizabeth Warren, Joe Biden, etc., and in the middle of all them was the largest poster of all: Mosie Boyd for President.

The caption was, “Anyone heard of Mosie Boyd?” This has not deterred Boyd from sending out her message: it is time to unify this country.

Mosie Boyd is a Presidential Democrat and has made her way onto the New Hampshire, California and Arkansas primary ballots. She uses her platform to address issues like the drug epidemic and gun violence. She has attempted to bring community leaders together to implement strategies that would reduce American lives lost due to drugs and gun violence.

Originating from Fort Smith, Arkansas, Boyd is the founder of True Grit Law Firm, manager of the River Valley Economic Development Council, and leader of the Madam President PAC.

Madam President is a political action committee that seeks to get a woman president elected. Boyd has been active in the committee since 2000, where she supports both Democratic and Republican women seeking to run for office. Women have faced multiple challenges to gain political positions and leadership roles in general. Boyd named two instances in her political career that were directly related to gender and changed the course of her career.

Boyd gained an interest in politics when she was given a job as a car driver for Dianne Feinstein’s 1992 Senatorial Campaign. When Feinstein and her team members came into town in Washington D.C., Boyd drove them to high-profile events and TV interviews. 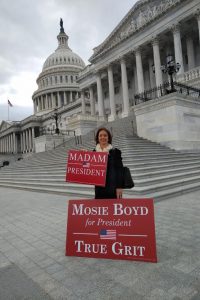 “I just graduated from Brown University and some people might not have seen that as the most exciting job but to me, it was right at the heart — you know I can hear all the interesting conversations going on in the car,” says Boyd in a recent phone interview.

Dianne Feinstein won her election, and Boyd was kicked out of her car-driving position. According to her chief of staff, it was not appropriate for a car driver to be a woman. A man was then given her job to fit into what she calls the “D.C. culture.”

Later on, after graduate school, Boyd went to California to work on an Attorney General Campaign, where he won and she was ultimately given a job in the Governor’s Executive Office due to her experience and credentials. In this role, it came to her attention that while she was working at a higher-level position, men who worked below her were getting paid more than her. After much hesitation, she decided to confront the staff director who was responsible for salaries. “It was fair to say he was nonplussed,” she says.

“I saw that young men were being mentored and trained to run for office, but talented young women were not,” she says. “After I left the Governor’s Office, I started a federal political action committee to promote the election of women to the U.S. presidency.”

When Boyd and her team began to set up events to help women run for office, she was shocked that so many qualifying women were not stepping up.

Boyd regards Victoria Woodhull as someone very important to her. Woodhull was a leader in the American Suffrage movement and is believed to be the first woman to run for president back in 1872. She was also the first woman allowed to publicly address Congress and established the Equal Rights Party, which was formed by abolitionists, labor organizers, and women’s rights supporters. Boyd believes that she deserves more recognition as a leader because she set a strong role model for women by asserting herself as a presidential candidate way back then. Boyd uses those values in her everyday life.

“This cycle where we see so many women running for president — I think it is very exciting and is a good precedent for American women and girls moving forward,” Boyd says.

In 2015 and 2016, Boyd traveled to New Hampshire to canvass for Hillary Clinton. New Hampshire is one of her favorite places to campaign because voters take it very seriously and listen to every candidate. Most recently, when she filed for her candidacy in November, she found people to be very receptive of her message:

“I keep it pretty simple, I just say I am running to rebuild patriotism by uniting Americans around our shared values,” she says. “I think there is too much noise on the extremes of both parties and we need to bring it back into the middle and focus on what really matters to the American people.” 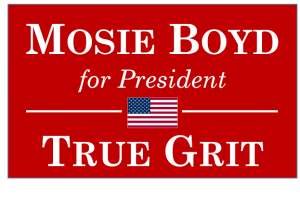 Boyd has the phrase “True Grit” in her campaign logo and it is also the name of her Law Firm she founded. When asked why this slogan resonates with her so much, she responded:

“It means having the courage and the stamina to do what’s right and I believe the strength of America lies in the heart of every single American. Each one of us has True Grit and it now is the time to rise up and defend our democracy and make sure that our leaders are doing what is in the best interests of our nation and serving the public rather than private interests.”

Campaign Manager Kateshia Marshall met Mosie in the summer of 2018, where she started an internship with her law firm, True Grit. Boyd explained to Marshall that to work in this field, you have to be motivated and get the job done, but most importantly, you have to have a love for people.

“As a person and as a presidential candidate, Mosie has a love for people… her heart is for the people,” Marshall says. “Her goal is to help everyone that she meets, she is very dedicated and she wants to get the job done. Whatever job there is to be done… she does that.”