The Democratic party is getting closer to selecting its presidential candidate. Tuesday’s New Hampshire primary was the first in the nation, following the Iowa Caucus. Democrats spent weeks crisscrossing the “Live Free or Die” state in an attempt to convince undecided voters of their merit.

Michael Chang, a 17-year-old high school senior from Boston, says he thinks the town hall meetings leading up to the primary are a great chance to compare candidates.

“The sort of atmosphere here, I feel like, it’s sort of the same-thing like going to a sporting event,” Chang said. 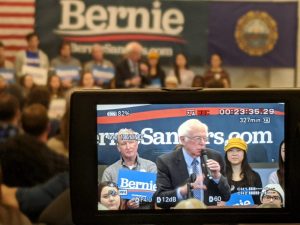 For Hannah Spangler, a freshman from Gorden College, the New Hampshire primary is a platform for her to learn more about different Democratic candidates.

“I just want to learn more about the Democratic candidates and see where they all stand because I’ve not kept up to date about that,” Spangler said.

After the chaos of the Iowa Caucus, including the untested smartphone app and technical glitches, results were delayed, according to The New York Times. The Caucus became a tight race between Vermont Sen. Bernie Sanders and the former South Bend, Ind., Mayor Peter Buttigieg. Both candidates earned about 26% of the votes.

Sanders’ supporters say they are still frustrated with the confusion. Theresa Yeo, 24, from Boston, is one of those frustrated Bernie supporters.

“I think it was very interesting, to say the least, the way that the results were presented, especially the 60% of the vote that shows Pete Buttigieg in charge when Bernie actually won the popular vote. In the end, I think it was a little bit shady,” Yeo said. “I just wish the Iowa Caucus was released a little bit cleanly.”

“The way the 60% of the vote and presented Pete Buttigieg as a front runner in the beginning and waited hours and hours before they release some more results until everything came even was unfair to all other nominees as well,” said Tony Tran, 24, a supporter from Boston.

“I think they probably should wait at least two days and just read all the votes in one go, rather than give the opportunity for different candidates to claim different things that are incorrect,” Tran said.

Five days after the Iowa Caucus, the DNC hosted the McIntyre-Shaheen Dinner in Manchester, N.H. Ten candidates shared a stage to pitch themselves to the voters. Supporters came together from different states to support their individual candidates. 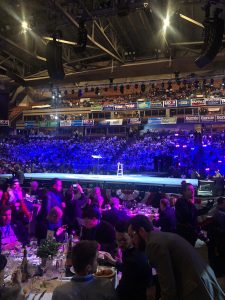 “We love the Bernie energy,” said Richard Bassler, an alumnus from Temple University. Bassler said he attended the McIntyre-Shaheen Dinner to support the DNC, though he remained undecided on which candidate to support.

“More importantly, the insight you get here in New Hampshire, the candidates and New Hampshire folks, you can’t get it anywhere else,” he said.

Medicare for all, free public college, raising the minimum wage, and implementing the “Green New Deal” are some of the policies that Sanders is touting. His website states, “I’m running for president so that, when we are in the White House, the movement we build together can achieve economic, racial, social and environmental justice for all.” 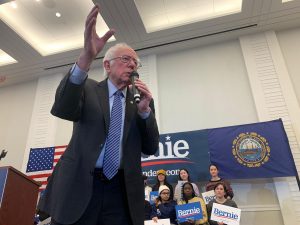 “I really like Bernie Sanders, I think he supports a lot of things that people hadn’t normally talk about in the past before, especially being an Asian American voter and he keeps trying to reach out to the American Community,” Yeo said.

At the Bernie Sanders’ rally at Dartmouth College on Sunday, many supporters felt that there was an alinement between their ideals and Sanders’.

Brad Atwood, an attendant of the rally, said Sanders was both his congressman and senator.

“I tell you he’s kind of a man for the ages in a way, somebody who’s been consistent in his message for 40 years and consistent in his personality,” Atwood said. “By far I see him as the strongest candidate who presents his policies.”

Nicholas Woo, a senior Native American studies at Dartmouth College, said he thinks Sanders has the most humane immigration policy.

“I think he has the best immigration platform, particularly because he recognizes that this immigration issue intersectional across race and economics and across gender,” Woo said.