In an increasingly polarized nation Republican Robert Ardini enters the presidential primary race offering “bipartisan solutions.” His slogan is “A Moderate Republican Even a Democrat Can Like.” Ardini is all set to begin his run at the Iowa caucus. His name will also appear on the New Hampshire, Colorado, Utah, and California Republican ballots.

All eyes are on the major Democratic candidates. Most of the Republican names challenging incumbent President Trump remain unmentioned by the media. That’s why Robert Ardini is a name you may have never heard of. Ardini believes he has what it takes to be elected president of the United States and wants his story to be told. Born in Queens, New York, Ardini comes from humble beginnings. His education includes graduating from the LaGuardia High School of Music and the Arts. Ardini received his bachelor’s degree from University of the State of New York. Part of his coursework took place at highly regarded The Julliard School.

Ardini is a complex figure. He has a zeal for classical music; intriguingly, Ardini is a pianist who’s student-teacher relations can be traced back generations to Beethoven. With a passion for growing roses, Ardini worked his way up to expert status as he was named to the Board of Directors of The American Rose Society. Ardini “believes in miracles”, especially in terms of his campaign, as he is a Roman Catholic. When asked about traveling, Ardini expressed his gain of perspective as he has visited all seven continents. All his experiences have led Ardini to be fiscally conservative and socially moderate and have created a new passion – running for president.

In 2016, Robert Ardini launched a run for Congress running in New York’s 12th Congressional District, notably President Trump’s congressional district. Up against Democrat incumbent Carolyn Maloney in a largely Democratic district, Ardini’s chances were slim. Not surprisingly, Ardini lost the race but still gathered 16.8% of the district’s votes in the general election. 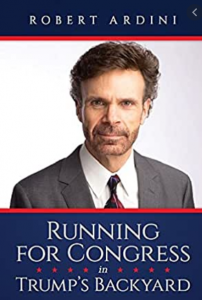 “I didn’t win but I did very well, so what’s the next step?” Ardini said a recent phone interview. At 58 years old, he has been an advertising executive, trustee, editor/publisher, and a small business owner. Today, in 2020 he is ready to bring all these acquired skills together in his run for presidency.

Ardini’s early life and run for Congress are explored in his 2018 book “Running for Congress in Trump’s Backyard.”

Why run for Congress in the first place? Ardini had a full career, none of which directly tied to politics, so why did he decide to get involved? Well, Ardini says he became a “political junkie” after getting hooked on the Anna Nicole Smith cable news drama. Every day he tuned in to hear about more twists and turns to the case and in doing so he also got caught up on the political news coverage. Ardini became hooked and progressively became more knowledgeable about federal topics. For Ardini, an interest in a celebrity case spiraled into entering the world of politics. In Ardini’s words he, “got tired of being an armchair critic” and decided to put himself in a position to be more involved.

As a result of his congressional run, Ardini says, “I got all these bipartisan solutions to the nation’s most pressing problems which I really believe in. What do I do to bring attention to them or put myself in the best possible position to implement them?” After his sister planted the seed, Ardini concluded that running for the executive branch was the way to go. Becoming president would put him in a prime position to implement his bipartisan proposals. Even in the run itself, Ardini says he has the opportunity to “bring light to them on the campaign trail.” 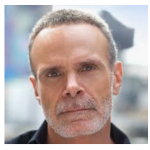 Ardini’s number-one campaign issue is the national debt. He is concerned about the increasing debt and the repercussions that will come because of it. Ardini says that the first thing he will do as president is convince Congress to balance the budget. One idea is to revamp the Simpson-Bowles Report: a bipartisan plan to reduce the annual federal budget deficit. Ardini believes that the plan could pass with some adjustments, bringing it up to date.

In this 2020 election cycle there has been constant debate over what should be done about the United States’ current healthcare system. Ardini offers to keep the Affordable Care Act but give it a few Republican tweaks. He suggests three specific alterations, in brief:

Ardini believes these changes made to the Affordable Care Act could pass and would reduce the cost of healthcare in our country.

Ardini is passionate about the topic of federal term limits. He is suggesting the standardization of a one five-year term for those in the House, the Senate, and for the President. Those elected could run again five years after their term but could never run consecutively. Ardini is speaking from personal experience. In running for Congress himself, he knows firsthand how much work goes into it. He fears that the moment someone gets into their congressional seat that, “they are dialing for dollars for reelection” because of the short two-year term. Ardini feels that making changes to the federal term limits would make sure that elected officials focus on their job rather than being concerned with reelection. A twist to Ardini’s idea is that he would not have the new term limits go into effect for 15 to 20 years. In doing so, he feels that the changes would be more likely to pass as those voting would not be concerned about their own status of their job.

Marie Coughlin, a personal friend of Ardini since 1992 when they met as members of the American Rose Society, described her feelings towards his candidacy in a phone interview. She describes Ardini as, “Very intelligent . . . detail-oriented . . . a good guy who like to help everybody and is looking out for this country.” Interestingly, Ardini’s friend is a devoted Trump supporter. Despite this, she is rooting for Ardini as he takes on the primaries. Coughlin doesn’t have a role in his campaign but fully supports his efforts. “I’m proud of him for going through with running and I believe he would make an excellent president,” she said.

In a phone interview Dr. Harold Henke reveals how he got on board with Ardini’s campaign. He was watching a TV report in Colorado that mentioned Robert Ardini’s announcement to run in opposition to President Trump. Henke heard Ardini’s slogan and said that he, “sounded like a guy I would vote for.” In addition to Ardini’s policy ideas, Henke is impressed with his following of Reagan’s 11th Commandment, “Thou shall not speak ill of any fellow Republican.” Henke appreciates Ardini’s drive to run a respectful campaign. Dr. Henke is now working as Ardini’s assistant deputy campaign manager in the state of Colorado.

To date, Ardini’s campaign is small; he explains it as, “a small nucleus” campaign. Due to Ardini’s past marketing experience he is working as his own publicist. When asked about what characteristics make him fit for the presidency, he emphasized his mediation skills. Ardini addresses how polarized the nation is and how valuable it would be to have a president that listens to both sides. In addition to this, Ardini mentions that his preferred news source is CNN. Ardini explains his reliance on CNN over FOX news, a source often favored by Republicans, “I don’t need to listen and hear people say things that I for the most part already agree with. I need to hear the other side. Because unless I fully understand and have an appreciation for how the other side thinks how can I possibly forge a bipartisan solution.”

Ardini is motivated to make his voice heard. As many cast doubts on any Republican going against incumbent Donald Trump, Ardini says, “Just like the lottery you have to be in it to win it.” Ardini is determined to pose a threat to President Trump in the primaries. He is hoping to capture the attention of media sources to launch his campaign into the public eye. For now, Ardini says, “I have to keep putting myself out there, sending out news releases, doing social media, accepting as many speaking engagements as possible, hoping that maybe just maybe I’ll get some press which will leapfrog me into the next level of media interest.”