On  top of being a real estate developer, and more recently an author for the iowastandard.org since May 16, 2019 Henry F. Hewes has not always been active within the political atmosphere. Hewes made his first appearance in politics in 1988 when Hewes was the New York State Director of Pat Robertson’s campaign for President and Vice-Chair of George Bush Sr’s presidential campaign. In 1989, he ran for Mayor of New York City as the nominee of the Right to Life party finishing in 3rd place. Then, in 1991, he was a founder of the New York Pro-Life Republican Caucus and in 1994, he ran for US Senate in New York for the Right to Life Party and received 2% of the votes according to Statistics of the Congressional Election. 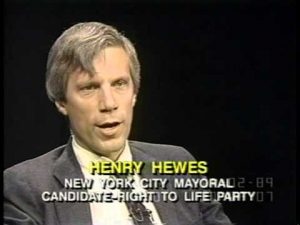 Hewes received his first leadership position during the late 1960s and early 1970s as the Chairman of “Students for Rockefeller in Massachusetts”. He was actively engaged within the student movements that opposed the draft. Along with that, Hewes was a surrogate speaker for Ronald Reagan In 1976 and 1980, Hewes was a strong and active supporter of Reagan, according to The Iowa Standard.

His previous positions on certain issues constrain him from identifying as a liberal or conservative. Hewes feels the core of his political belief stems from his Christian faith. According to The Iowa Standard “He is committed to the rights and responsibilities of the individual and at the same time is committed to protecting and caring for the weak and vulnerable.”

In 2016, Hewes ran for president as a Republican; then in 2020, Hewes announced that he would run as a Democratic presidential candidate. A major platform of Hewes is that he is pro-life, he stated in a 2016 interview with Rolling Stone, that he was he is against any form of capital punishment and is worried by the number of politicians that “are utterly untroubled by the 58 million aborted children since 1973.”

According to Hewes’s website, he feels the financial system in the United States needs reform, and so does the Veteran Administration. Hewes believes that every veteran should receive fully covered medical insurance.

Hewes has been opposed to war since the 1970s, and opposed to the war in Iraq. His anti-war, pro-civil rights stance convinced Hewes to quit the Republican party. These concerns were ultimately the deciding factor of Hewes changing his political affiliation from a Republican to a Democrat in 2004.